I must confess I am a horrid 2D artist, so I have to use all kinds of pictures and photographs as stencils. I use vectors not only because they have an elegant flair, great technical practicality and beautiful mathematical principles to them. They also let me correct my mistakes really quickly instead of having to erase and redraw hundreds of times as I usually do when working with pencils and bitmaps. 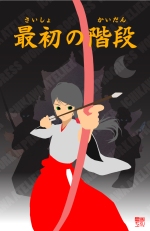 Above is a quick progression of the game poster.

I first positioned my stencils with a classical videogame composition. Then I just traced above them to have general outlines I could work upon. I thought I could easily represent the main ghosts with silhouettes which would save me hours and hours of work and design. To be honest, I would rather the main character not use a bow in the poster, but I kinda liked the picture and felt too lazy to draw a picture form scratch of Kyoko brandishing a wand. Later, when I have some time, I might replace that drawing.

Then, of course, came lights, shadows and textures. The mansion texture was just a watercolor background cut with a path mask. It was initially positioned so that the last color droplets showed behind the characters but it seemed a bit tacky, so I just hit the end line behind their silhouettes.

Then I exported the paths into Photoshop and used a picture of a cloudy sky behind and in front to create some ambiance. I was super happy with the result and promptly showed it around. Some designer friends pointed out a few inconsistencies and glitches which were easy enough to fix in the vector version. The main issue was that Kyoko seemed cut out of the environment. Lights did not bounce upon her and the fog just avoided her. I recolored shadows and reflections. I decided to leave the light completely white instead of bluish to allow her face to pop out a bit. 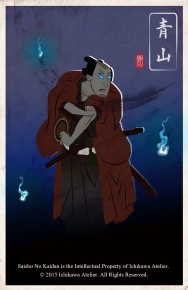 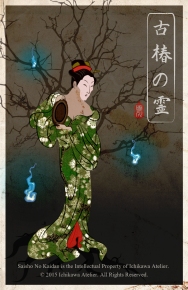